A recent Friday Khutbah which explores the importance of confidence and trust in God, as a means for identifying tools for personal/social refinement, as well as identity building.

This presentation also gives a slightly different look at the famous Quranic verse 49:13 ("O Humanity! Indeed, WE have created you from a male and female, made you into groupings and tribes, so that you will know (and benefit) each other. Indeed, the most honorable of you in God's sight is those among you with the most taqwaa, indeed, Allah is knowledgeable, aware") as a text which shows diversity as being part of the Divine plan.

Posted by Shamsuddin Waheed at 3:49 PM No comments:

Unity In Pandemic presentation (Q and A panel session)

( Recently we were part of a program called "Unity in Pandemic". In particular, I really enjoyed the panel discussion, in which Ner Temid congregation Rabbi Saford Askerlod and Rev Catherine Greg shared wonderful insights. The entire program (which included presentations by all panelists and musical performances) can be viewed here . )

The panel discussion itself can be viewed at the link below.

Friday Khutbah: The trials of life as course correction

( Note: The following is a recent Friday prayer sermon -Khutbah- in which the Islamic concept of life's trials are examined. Thoughtful comments and discussion are welcome)

Posted by Shamsuddin Waheed at 12:07 PM No comments:

Pondering The Presence Of God In Our Lives

Recently I delivered a khutbah (Friday prayer sermon) in which the focus was the powerful, yet controversial Qur'anic verses which reads "To God belongs the East and the West, therefore, where ever you turn, you encounter the face of God. Indeed, God is the Expansive, the Knowledgeable."

The context of this ayah addresses the human tendency to create categorizing, labeling, and that such labeling has no impact on the Divine Being (Allah, Subhaanahu wa ta'alaa). He is not limited by the limitations we create. He is not "Our God" to the exclusion of others. The guidance of Allah can be encountered by any, regardless of their location, background or (artificial) label.(#.1)

While this article largely ignores the theological discussion surrounding the verse in question(#2) , studying this verse has prompted me to ponder upon the presence of Allah in my own life, and-likewise- I invite our readers to think about the same question.

Some people, in particular Prophets of the past, and present day saints, have encounters that impact both themselves and those around them(#3) . Due to the presence of such accounts in scriptures, this is what a goodly number of religious people desire to experience, and are left wondering if God truly cares, when such miracles have not happened.

Others think of God as the miracle worker. In the USA there are a number of Television preachers who solicit donations from viewers, promising a heavy payout, selling an illusion to desperate (and usually poor) people.

Allah can be truly experienced, as the above ayah mentions. His presence is in his replacing one situation with a better situation, with His turning grief into joy,  His placing a mind and a conscious in us, in saving us from the accident, in His putting the right answers in your mind when they had been absent beforehand. His presence is known when we look at a beautiful sunrise, a full moon in a clear night, even in pets who show affection to us.

His presence is in the loved ones around us, in the prayers we offer, the supplications we make, and in the words of remembrance of Him that we recite.(#4)

A "miracle" can happen, however that is not the point. "Miracles" can likewise emerge from tricks, gadgets we are unaware of, and even from demonic forces!(#5)

The presence of God -when truly experienced- should give us strength, drive, determination, a moral compass, emotional and spiritual maturity.

It is not an overnight experience, but it can happen. And we can benefit from it.

May we all be able to experience God.

(2) The controversy, particularly in the modern period, revolves around the term "face of God" (Wajh Allah). Some Muslim groups have chosen to be open to a literal reading of that expression, but with the caveat that while it is real, its nature is unknown to us. Quranic expressions such as "His Throne" "the hand of Allah", and the like have received similar treatment. However, it has been almost universally understood that these expressions are metaphorical in nature, and need not be viewed with a literal interpretation. I understand the term "face of Allah" to refer to His presence, and this is the view expressed by the majority of commentators. This controversy cannot be adequately addressed in an end note, however on related topic, see our reflections on the throne verse http://shamsuddinwaheed.blogspot.com/2008/01/divine-throne-examination-of-ayatul.html

(3)  The term "saints" can admittedly be problematic for Muslim readers. The word 'Awliyaa" (singular Wali) is typically translated as "saints" or "allies (of God)" does not quite have the same religious/cultural  implications  as the term "saint" in Catholicism. Nor do we limit the possibility of God's direct interaction to saints. An important Quranic reference to examine on the subject of God's direct communication with humans can be found in Q 42:51.

(4) See Q 2:185, which shows that even a verbal affirmation of the Divine is sufficient to generate a real presence of Allah.

(5) The Qur'an repeatedly states that "miracles" ( as popularly understood) do not constitute a strong evidence at all. Indeed, it presents itself as a text with rational arguments and evidences of its claims.

Encountering the Face of Allah: Reflections on the Divine

(Note: The following is our recent Friday Khutbah (sermon) that centers around one of the most beautiful, yet controversial, Quranic verses. Our mosque facebook page (The Masjid Ibrahim) broadcasts via livestream every friday at 1:00 PM (P.T.). We hope this post generates discussion and reflections, as it is truly a deep topic. We also encourage a contextual examination of the chapter in which this verse appears, as it would be rewarding.وَ لِلّٰہِ الۡمَشۡرِقُ وَ الۡمَغۡرِبُ ٭ فَاَیۡنَمَا تُوَلُّوۡا فَثَمَّ وَجۡہُ اللّٰہِ ؕ اِنَّ اللّٰہَ وَاسِعٌ عَلِیۡمٌ

The East and the West belong to God. Whichever way you turn, there is the Face of God. God is all pervading and all knowing. (Maulana Wahiduddin Khan translation)

Posted by Shamsuddin Waheed at 7:09 PM No comments:

Q & A session in sunday school

Note: The following videos are from Sunday school gathering, in which an exchange took place between teachers and one of our students. Click on the video comments for time stamps, which summarizes the subjects.

Although the discussion was geared towards addressing the questions of a child, I think the contents of the videos are beneficial for adults as well.

An environment for growth: reflections on Soorah Al A'laa 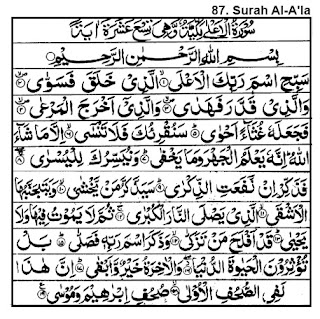 
One of the main functions of the Qur'an is that it compels us to think, to ponder on its words, its message, as well as how that plays out in our lives or the world around us. This Soorah is particularly interesting, in that it weaves together a tapestry of images designed to evoke deep thought. This Soorah is often recited in Salaat Al Witr and Salaat Al 'Eid.

The symmetry is beautiful. The structure of the creation, the physical world, is evidence of Allah's work, displaying reasons we should glorify him.


It reads "We (God) will relate to you, so forget not, except as Allah has willed, Indeed, He knows the visible as well as the hidden". Some have taken this as textual evidence of abrogation (Naskh) in the Qur'an, not only in the development of laws, but even texts. Some have read this as proof that the Prophet was to "Forget" some of the Quranic revelation. The latter view is particularly disturbing, as it presents the Qur'an in a very weak position, as if it is so unworthy of adherence that it has to literally be forgotten. The nature of the Qur'an is the opposite, it is read, memorized and pondered upon by millions, ever since its revelation. To attribute dismissing any Quranic revelation to the Prophet is to do a disservice to both the Prophet, (peace and blessings of Allah be upon him) and the Qur'an itself.

In his comments, the Qur'an commentator and translator Muhammad Asad  (whose work is called The Message of the Qur'an) alludes to these verses not actually referencing the Prophet or the Quranic revelation given to him. He argues that these verses refer to "mankind's cumulative acquisition of empirical and rational knowledge, handed down from generation to generation and from one civilization to another"(ft.1)

We state this in another way, Allah conveys lessons, points of reference or information, that will be submerged when more important or useful points are needed. This is the Divine system, alluded to elsewhere in the Qur'an, and can be related to all points in the life of  a single human being.

"And We (Allah) will make the easiness easy for you, so do remind, because reminder is beneficial, such reminder will be really beneficial for those who have fear of God, yet, that reminder will be shunned by the most wretched ones, who will enter the great fire, therefore, in it they neither experience death nor life."

The core commands of God are easy, and He has made them easy. Being open to guidance is-in fact- a characteristic of guidance. Those who shun reminders are those who carry arrogance within themselves, who eventually enter a fire (in this life, fully experienced in the life to come) that consumes them, they can not life healthily therein, nor can they mercifully expire.

There is a logical flow present in this Soorah. Being open to Divine blessings, being able to see the big picture and praise God for it, dropping what God wants you to drop, in order to progress in life.

The rectification of the soul (Tazkiyatun Nafs) is am important subject within Islam, rooted in the Qur'an, it has been noticed by the many great minds of the Muslim civilization, such as Imam Al-Ghazali, but the point being is that we have to be consistent in looking at self, just as we are consistent in bathing!

Vigilance in purifying efforts is mainly exercised, as the verses indicate, through reciting the name(s) of Allah and through prayer.

The classical commentator Abul Qasim Mahmud Az-Zamakhshari  (d.1144) cites the importance of purification from idolatry, disobedience, as well as acts of physical purification which precedes prayer, as concrete examples of things to do to be vigilant in soul-care (ft.2).

It is my view that these verses can apply to both the life now (Dunya) and the life after death, as well as life with and without guidance.

The life without guidance can be glittery. It is glitter. It is attractive in many ways. However, the life of substance, of real and tangible core values, morals and ethics, a life of God-connection, that is the real life, the enduring life.

These insights were presented and symbolized by both Abraham and Moses, upon both of them be peace. They stood for God and were connected to him.